Why Zebrafish (Almost) Always Have Stripes 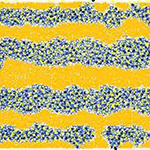 One of the most remarkable things about the iconic yellow and blue stripes of zebrafish is that they reliably appear at all.

Zebrafish begin life as transparent embryos, with three types of pigment cells on their skin. As they develop, the pigment cells somehow manage to organize themselves almost without fail into the stripes we all know.

Now researchers have developed a mathematical model that may explain the key role that one of those pigment cells plays in making sure each stripe ends up exactly where it belongs on the fish.

“It’s amazing that you have these individual cells that can sort themselves into these reliable patterns,” said Alexandria Volkening, lead author of the study and a postdoctoral fellow at Ohio State University’s Mathematical Biosciences Institute.

“The cells move around on the skin to create stripes. It’s like individual birds that know how to flock together and fly in formation.

This new model suggests that one of the pigment cell types – called iridophores – leads the process of cell organization. These cells provide redundancies in the cell interaction process that ensures that if one interaction fails, another one can take over.

The result is that zebrafish get their stripes, even when some of the cellular processes go wrong, she said.

Volkening conducted the research with Bjorn Sandstede, professor of applied mathematics at Brown University. Their study was published today in the journal Nature Communications.

Until recently, almost all research on zebrafish stripes focused on the other two pigment cells: the black cells (called melanophores) and the yellow cells (called xanthophores). It wasn’t until 2013 that biologists discovered that iridophores also played a role.

The role of iridophores is definitely vital: Some mutations of zebrafish that don’t have iridophores develop spots instead of stripes.

“In our mathematical model, we use what we know about the interactions of the other two cell types to explain what drives iridophore behavior. We found that we could predict what iridophores would do in a way that matches up well with what biologists have observed in zebrafish,” she said.

Researchers have known that iridophores change their shape in carefully orchestrated patterns on the skin of zebrafish, and the changes in shape instruct the other two types of cells on where to go in ways that result in stripes.

The model explains what drives these shape changes.

The model showed, not surprisingly, that the process is extremely complex, Volkening said. But the complexity is necessary to build redundancy into the process. The researchers found that they could reduce the complexity in the model in some ways, and the zebrafish would still develop stripes.

“We think that is because iridophores are getting their signals from multiple places. If one interaction fails, there is another that can take its place,” she said.

“Because of the redundancies, you can remove some interactions, and still get stripes. They’re not perfect stripes, but they are similar.”

However, there are cases when the process breaks down so much that stripes no longer form. That occurs in some mutations of zebrafish. Volkening said the model can account for these mutations, which adds to the likelihood that the model is correct.

“The biological discovery of the role of iridophores was a real paradigm shift in how we thought zebrafish stripes were created. This led to a lot of open questions, and our mathematical model provides an explanation for how iridophores behave on the fish skin,” she said.

“We show that the complex interactions of these cells may be important for reliable stripe formation, but also key to why zebrafish have stripes but related fish have different patterns.”

This article was originally posted by OSU News at: https://news.osu.edu/why-zebrafish-almost-always-have-stripes/