For humans and other mammals, breathing is essential to life. The breathing rhythm relies on an area of the brain stem known as the pre-Bötzinger complex, a network of neurons exhibiting rhythmic bursts of activity that initiate inspiration. The frequency of the rhythm varies in response to such challenges as exercise, sleep, or changes in altitude. The pre-Bötzinger complex also participates in detecting reduced concentration of oxygen in the blood, stimulating a gasping response in order to restore healthy oxygen levels. This response is critical to the more than 12 million Americans diagnosed with Obstructive Sleep Apnea, a disorder in which a sleeping individual’s breathing undergoes prolonged pauses broken by gasps or sighs. The failure to gasp has been implicated in Sudden Infant Death Syndrome. It has become clear that an understanding of the cellular mechanisms underlying normal and distressed breathing would be invaluable in treating these and a host of other respiratory ailments.

Experimental and theoretical studies have led to development of a biophysical model of a network of pre-Bötzinger cells that provides a framework for analyzing the potential roles of cellular and synaptic processes in the generation and control of rhythm. The model has been used to make observations concerning how a network of cells may generate different activity patterns than those of the individual cells that the network comprises. Of particular significance were the findings that the model network was both more flexible and more robust than the individual cells. Network activity could exhibit a wider range of frequencies than could the individual cells, and the network was also able to sustain rhythmic bursting activity even when properties of cells were varied so that isolated cells were incapable of such activity. 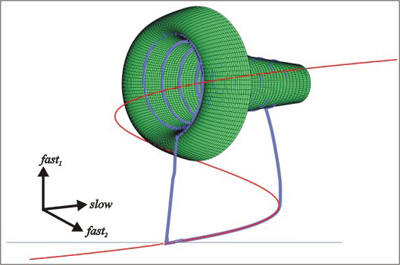 MBI postdoctoral researchers Janet Best, Alla Borisyuk, and Martin Wechselberger joined with mathematicians Jonathan Rubin (University of Pittsburgh) and David Terman (The Ohio State University) to provide a thorough mathematical analysis of the mechanisms underlying these observations. Using geometric dynamical systems techniques, predominantly a nonstandard fast/slow decomposition and bifurcation analysis approach, their work has elucidated the dynamical mechanisms that lead to various activity patterns seen in the network. Unexpectedly, they have found that the rhythmic bursting activity of the network qualitatively differs from that of individual, isolated cells; in particular, cells in the network typically are not firing synchronously, and this lack of synchronization plays a key role in allowing the network to exhibit rhythmic bursting even when individual cells would not. Their analysis predicts that these qualitative differences may be detectable experimentally in the pre-Bötzinger complex and provides implications for quantitative aspects of network activity, including frequency selection. This study also advances the current mathematical understanding of transitions between activity modes in more general networks of cells.

The MBI brought these researchers together during the thematic year on Mathematical Modeling of Cell Processes, and most of the research for this project was conducted on the premises of MBI. As ongoing experiments have revealed further details concerning intrinsic properties of cells in the pre-Bötzinger complex, the biophysical model has continued to be refined, and the analytical approach developed in this project continues to be applied by these researchers and by others. These cells are now postulated to play an essential role in generating breathing rhythms in mammals, and delineating their properties may provide a means to understand and treat life-threatening failures of breathing such as Sudden Infant Death Syndrome and some sleep apneas.

[Note: The figures are legal.] Caption for the burster image: A “top hat” burster can arise when pre-Bötzinger cells are coupled in the model.