The Topology of Algebraic Varieties 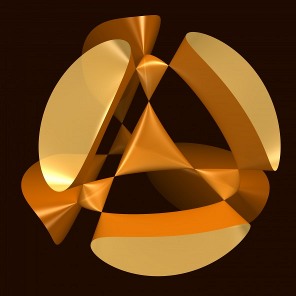 On the other hand, one central goal of algebraic geometry which remains mysterious is to describe all the subvarieties of a given algebraic variety. More precisely, one considers algebraic cycles , which are linear combinations of subvarieties, and Chow groups , which are the algebraic cycles modulo a natural equivalence relation. We want to understand the Chow groups of an algebraic variety in terms of its Hodge theory , which is a more computable invariant related to singular cohomology and integrals of algebraic functions (known as periods). The Hodge conjecture is a model problem of this type.

Another distinctive feature of algebraic geometry is that the space of algebraic varieties of a given type can itself be viewed as an algebraic variety, known as a moduli space . There are deep interactions between moduli spaces and the theory of algebraic cycles. For example, Professor Pierre Deligne’s notion of an absolute Hodge class depends on the possibility of changing the coecients of the de ning equations. Voisin made progress on the Bloch-Beilinson conjecture for complete intersection varieties by considering the moduli space of all such varieties. Over the complex numbers, the study of the deformations of a variety leads to the theory of periods and associated monodromy representations. Over number elds, this is replaced by the notion of Galois representations.

The interaction of people working on the topology of algebraic varieties from these many di erent viewpoints made this one-year program very fruitful.

The program had four main themes:

Here are some of the numerous advances achieved during the program:

The second workshop was on Chow groups, motives and derived categories . The notion of the derived category of an algebraic variety has been studied intensely, as a precise and refined way of studying a variety starting from the study of its vector bundles. The last point is also the starting point of algebraic K-theory and the closely related Chow groups. The derived category itself contains much more information. Thus di erent aspects of algebraic K-theory and its recent developments in various guises were represented. Some talks also addressed Chow groups over non-algebraically closed elds and applications to rationality questions.

As a complement to these workshops, a conference on rationality problems was organized at Stony Brook University by R. Laza, C. Schnell, J. Starr and C. Voisin, focusing on the applications of some of the tools sketched above to the so-called Lüroth problem, or its stable version, searching for criteria characterizing rational or stably rational varieties. Two recently developed new tools or approaches for the Luroth problem were discussed and compared: methods of algebraic cycles (decomposition of the diagonal) and methods of derived categories.

Finally, two special days on algebraic geometry were organized, one joint with Columbia University and one with Princeton University.