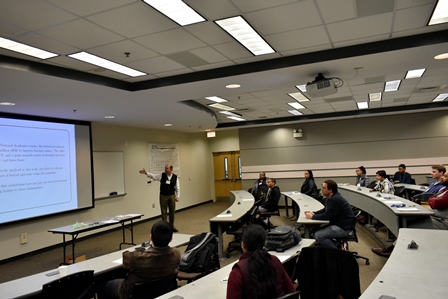 David Banks, SAMSI Director, gives a talk on how statistics is used in the legal system during the Statistics in the Criminal Justice System Workshop , Mar. 24. Banks talked about his experiences appearing as an expert witness in a trial that centered on discriminatory practices used in law enforcement. The workshop was held at NCCU and was offered to undergraduate and graduate students participating in science and math-based curriculum. This event marked the first time SAMSI has performed a workshop on the campus of a HBCU.

The workshop, Statistics in the Criminal Justice System , was about how statistics is used in forensic science and the legal system. This event was the first time that SAMSI has co-hosted a workshop with a Historically Black College or University (HBCU) and it provided an opportunity to expand awareness about the uses of applied mathematics and statistics to African-Americans and other underrepresented groups.

“We wanted to expose an interesting and important aspect of the use of statistics to the students attending this workshop,” said Elvan Ceyhan , SAMSI Deputy Director and one of the primary organizers for the event. “Our postdocs and graduates also provided important information regarding the opportunities upon graduation.”

The workshop was highlighted by keynote speaker Dr. Kristian Lum . Lum is the Lead Statistician for the Human Rights Data Analysis Group (HRDAG) . Her research focuses on how machine learning-based predictive policing models often lead to racially biased law enforcement. Lum’s talk was primarily about how certain statistical algorithms give results that draw law enforcement into positive feedback learning cycles that reinforce false conclusions and fail to fully explore locations where crimes are being committed.

Lum was followed by David Banks , SAMSI Director, who spoke about his experience as an expert witness in a case involving potential ethnic bias and a local sheriff. Banks explained how research professionals are chosen and deposed by the legal system and what criteria were used in his case to determine guilt or innocence.

Part of SAMSI’s future goals are to branch out and include events like this in their annual workshop planning agenda. Feedback from the students who attended was largely favorable and many felt as though events like this would be beneficial at other HBCUs as well.

“I definitely think that a lot of people are interested in statistics and from what I’ve seen there is a large demand for it [statistics] in the future. I think because of that you’ll probably find a lot of interest as you go around to different schools,” said Christian Richardson, a senior biology major and math minor at NCCU.

The report highlights trends and demographic data of women, people with disabilities and minorities from three racial and ethnic groups – African-American, 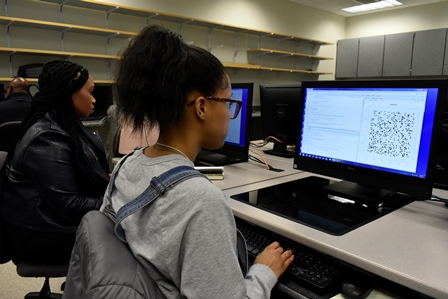 Ciara Allen, an undergraduate mathematics major at NCCU, works with R Software during a practical exercise at the Statistics in the Criminal Justice System Workshop on the NCCU campus, Mar. 24. Allen and several other students attended the one day workshop to learn about this software, used in statistical analysis, and how to prepare for a future career in math and/or science fields of study. The event marked the first time SAMSI has hosted a workshop on the campus of an HBCU.

Hispanic and American Indian or Alaska Native. The 2017 report noted that between 2004 to 2014 masters and doctoral degrees among underrepresented groups has increased. This trend has driven a significant increase in employment in science, mathematics and engineering jobs.

SAMSI’s mission is to influence the next generation to pursue careers and research opportunities in applied mathematics, statistics and computer science-based occupations. This is what led to the opportunity for SAMSI to connect with students at NCCU.

“For a long time, SAMSI has wanted to forge a connection with NCCU and other HBCUs in the area,” said Banks. “This program was a great first step and we shall follow it up with more interaction and another workshop in the fall.”

Students attending the workshop also took part in a small tutorial on the use of R software. The students learned how to use data captured in R to predict and, in some cases, help solve actual crimes.

“I came to this program to understand R software to help me with a graduate project,” said Darryn McLaughlin, a graduate student working in the Earth, Environmental and Geospatial Sciences Department at NCCU. “It [R] is new to me and I wanted to use this as an opportunity to get a basic understanding of how I can incorporate it to use in my project.”

Many students were excited to explore the software package and learn about its practical applications. The scenario presented in this workshop centered on using national finger print data to determine links between crime scenes and perpetrators. The goal of the exercise was to see if one could truly identify trends that point to crimes committed in different locations, but by the same perpetrator using the same modus operandi (MO). Using the finger print data at multiple crime scenes, the students got to see how to infer such patterns from the evidence and statistical data acquired at the crime scene.

Students also enjoyed the panel discussion by postdoctoral fellows and MS and PhD candidates. The panelists described their personal challenges and successes as they pursued their own careers in math and science. For some NCCU students, the experience opened their minds to the possibilities of pursuing a career in these fields.

Ciara Allen, a mathematics undergraduate at NCCU, talked about what attracted her to the workshop and what she learned about future pathways towards a career in science and math.

“It was the intro and hands on for the R Studio that attracted me initially…However, after I got the flier in the email and I read over it, I thought this was interesting to see how math can be applied to other ‘not so mathematical’ areas’,” said Allen.

Allen also said she took solace in the fact that even though her future plans in math were uncertain, she learned from the panel that the research in math and science is so broad that a person can study several areas that interest them and eventually find something that’s right for them, or simply continue to pursue new discoveries or opportunities that are of interest to her.

“I think this has been a good first step in reaching out to underrepresented minorities, and we would like to make use of this experience in our future endeavors,” said Ceyhan.

To find out more about what was presented at this workshop, visit the webpage at: https://www.samsi.info/nccu .