SAMSI Brings Astronomers and Statisticians Together to Study Universe

Four graduate students came together from different universities and a variety of disciplines: Jim Barrett studies astrophysics in the University of Birmingham’s School of Physics & Astronomy, Maya Fishbach studies astrophysics at the University of Chicago, Bo Ning studies statistics at North Carolina State University, and Daniel Wysocki studies astronomy at Rochester Institute of Technology. The four met by attending the Astrophysical Population Emulation and Uncertainty Quantification Workshop held by SAMSI , April 3-7, 2017. This workshop was one of a series workshops in a one-year long program on Statistical, Mathematical and Computational Methods for Astronomy (ASTRO) .

This was a very hands-on workshop which provided the students with wonderful opportunities to sit down and have face-to-face discussions with fellow researchers from a variety of university backgrounds. Given the fact that all of the students were from different disciplines (three from Astrophysics and Astronomy and one in Statistics) and different universities (including one from overseas), it wouldn’t have been possible for them to meet and collaborate until the SAMSI workshop gave them an opportunity to do so. The four students appreciated the opportunity provided by SAMSI and National Science Foundation (NSF) for supporting their fields of study and giving them the chance to collaborate and meet with so many eminent researchers in Astrophysics, Mathematics and Statistics, clearly, an opportunity which would perhaps last throughout their academic and professional careers.

Background
The theme of the workshop was to discuss using fast emulators to generate population models from various fields in astrophysics, including exoplanets, gravitational waves and extragalactic astronomy. Ilya Mandel , a professor at the University of Birmingham, and Derek Bingham , a professor at Simon Fraser University, organized this workshop.

During the first day of the workshop, researchers gave short presentations about their working projects in the morning, and four working groups were formed in the afternoon. The first group’s purpose was to discuss “ the population emulation of massive binary stars,” and “ the population of exoplanets .” The second group focused on “estimating statistical density functions for the population of gravitational wave sources.” The third and fourth groups focused on “ Gaussian process (GP) model inference.” One of these groups focused on setting up GP models and coding them into python notebooks, while the other focused on building a GP emulator into a Hierarchical Bayesian model.

After the working groups were formed, the group members spent the majority of their time discussing new ideas and working on preliminary results throughout the remaining days of the workshop. Besides these group discussions, three tutorial lectures were given by Derek Bingham and Earl Lawrence on the second and third days of the workshop. These tutorials introduced computer model emulators, especially the GP model, discussed model calibration, and gave an overview of how to choose different strategies for the design of computer experiments.

During the workshop, the students attended different groups and had different experiences. The rest of this piece is written in their own words and from their own perspectives:

“I have been interested in astronomy since I was young, but I never dreamed about the day that I would be able to work side-by-side with astronomers, using statistics to solve their problems.”
– Bo Ning 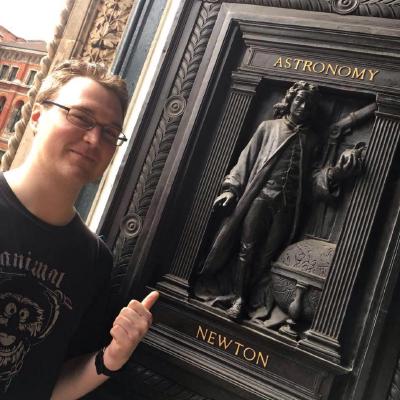 I came to the workshop with my supervisor Ilya Mandel from the University of Birmingham in the UK. We work on modelling the evolution of binary stars, and in particular the kind of systems that could potentially become gravitational wave sources. We are actively developing a rapid population synthesis code, which simulates the entire lifetime of a binary star in a fraction of a second. This allows us to generate vast populations of binaries, so that we can use statistics to study the population as a whole.

In particular we are interested in how we can use gravitational wave observations to challenge the assumptions we make in our simulations. However, this is highly challenging, since gravitational wave systems are so difficul t to make, we typically need to simulate tens of thousands of systems to get just one gravitational wave source. We therefore came to the SAMSI workshop to get help and advice on building an emulator for our model.

We spent the week engaged in many stimulating and fruitful discussions with the statistics experts and fellow astrophysicists. We discussed the best approaches to building an emulator and spent many hours talking about experiment design. We left the workshop with a solid plan for how to proceed with or emulation problem and eager to continue to collaborate with the workshop participants in the future. 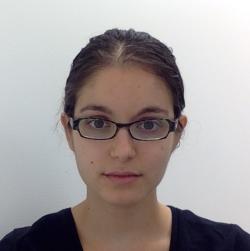 After attending the ASTRO opening workshop in August, I was excited to return to SAMSI. My research interest is to learn about populations of black holes from analyzing gravitational wave data, so I had joined Working Group 4 at the opening workshop. At one of the working group’s weekly telecons, Sujit Ghosh , SAMSI Deputy Director , presented his research with Angie Wolfgang and Bo Ning into using Bernstein polynomials to estimate the joint mass-radius density for a population of exoplanets. After email discussions with Sujit, Angie and Bo, I was inspired to further explore statistical methods for density estimation that could also be applied to populations of black holes. Thus, while my goal for this workshop was to explore density estimation techniques, I knew that I would encounter new ideas along the way that would inspire new and unanticipated projects.

For example, in initial discussions with statisticians Sujit, Bo and Ji Meng Loh , the problem of selection effects kept coming up. In the case of gravitational waves, massive compact binaries are louder than less massive ones, and so we are more likely to detect them. Therefore, when inferring the mass distribution over the population of compact binaries, it is critical to account for this selection effect that prefers massive binaries. Fortunately, Tom Loredo , Ilya and Daniel Wysocki had previously thought a lot about how to incorporate selection effects when analyzing populations of astronomical objects. This led to a large fraction of the astronomers and statisticians spending an afternoon listening to and discussing their results. Open problems remained in the case where the selection effect was not known precisely. For example, Leslie Rogers thought about how to define the selection probability for exoplanet mass and radius measurements – because the mass and radius are measured by different surveys. In addition, Kaisey Mandel , was working on defining selection effects for supernova surveys. The topic of selection effects is fundamental in astrostatistics, and it was very useful to discuss known methods of incorporating selection effects in a population-level analysis as well as challenges that remain. 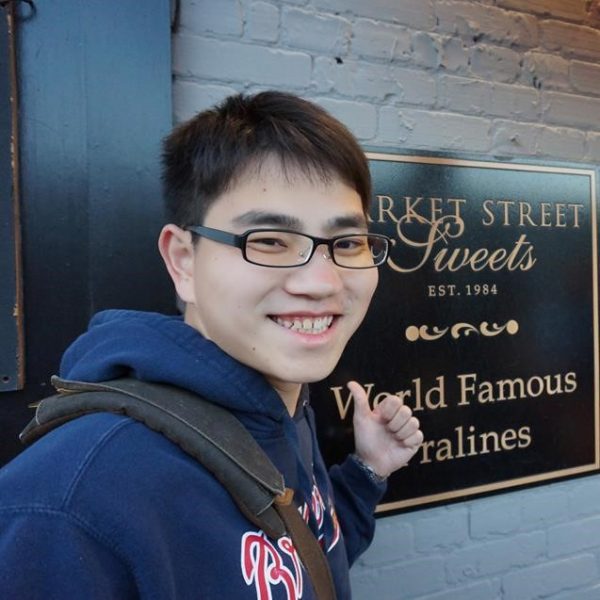 I have been an active participant in the Astro program at SAMSI since the opening workshop began in August, 2016. Since then, Sujit Ghosh, Angie Wolfgang, and I have been working on a project, using a nonparametric method for estimating the mass and radius relationships of exoplanets . It is well-known to astronomers that the mass and radius of exoplanets follow a power-law relationship. Previous studies focused on making parametric assumptions based on the power-law model. However, these assumptions are somewhat arbitrary and often fail to hold true. As a result, we are using a more flexible model to estimate exoplanets’ mass and radius relationships.

This workshop provided Sujit, Angie and I with the opportunity to meet and to have face-to-face discussions on details of model inference. After the workshop ended, Angie and I spent an extra week working on our project. Our outcomes from the past two weeks were huge. For example, we finished the outline of the paper draft and obtained some preliminary results. We also sorted out our future plans and possible cooperation after the end of this workshop.

In the meantime, during the workshop, I also had discussions with Maya Fishbach and Daniel Wysocki about their project on gravitational waves. Even though this topic is quite different from modeling mass and radius relationships for exoplanets, the nonparametric model Sujit, Angie and I used in exoplanet was also useful to solve some of their problems, which was very exciting.

I would like to thank SAMSI for providing a great opportunity for interdisciplinary cooperation. I have been interested in astronomy since I was young, but I never dreamed about the day that I would be able to work side-by-side with astronomers, using statistics to solve their problems. Through my participation in this program, and by attending this workshop, I learned a lot about how to apply statistical models to solve problems in astronomy.

After the incredible learning experience I had during the ASTRO opening workshop last August, I was pleasantly surprised that the Astrophysical Population Emulation and Uncertainty Quantification workshop surpassed it. As a 2nd year astrophysics Ph.D. student, I am working on methods to constrain the properties and origins of the population of compact binary objects responsible for the gravitational waves observed by the Laser Interferometer Gravitational-Wave Observatory (LIGO) . By working with astronomers and statisticians working on problems from different domains, but with similar statistical challenges, I gained a much deeper understanding of the fundamental concepts and problems underlying the statistics relevant to my research.

One subject I gained a great deal of insight into was dealing with selection effects. Since I work with gravitational wave observations of individual binaries, all of my inferences on the population have to account for the fact that we’re more likely to detect massive objects due to the resulting increased signal strength, as well as a number of other biases. I came to appreciate how easy I have it after Eric Ford described a problem that depended on the number and types of planets orbiting each star; incredibly challenging considering we may never see some of those planets. Many questions I had on selection effects going into the workshop were cleared up, and I even discovered an error in an essential equation in a paper I’ve been writing.

In addition to the effective mix of people, I also thought the number of people attending the workshop hit a sweet spot. There were enough people to keep good diversity in skill-sets, but it was also a small enough number that I got to meet the majority of people attending, which is a hard balance to meet.

A new collaboration was started as a result of this conference, between Dr. Sujit Ghosh, Bo Ning, Maya Fishbach, and myself, which will come to fruition over the coming months. In describing the related astrophysical problems Maya and I are working on, Sujit came up with an alternative approach utilizing copulas, which I was unaware of beforehand. We will be working on a paper where we apply this type of method, and compare its performance with the approaches we’ve taken in the past.

As the ASTRO program comes to a close, I’m sad to see it go. Since the opening workshop, and the many SAMSI teleconferences I have attended throughout the year, I have learned a great deal about the general field of astrostatistics, and now understand the major statistical challenges being faced across the many branches of astronomy. I hope to find myself back at SAMSI for similar programs in the future.