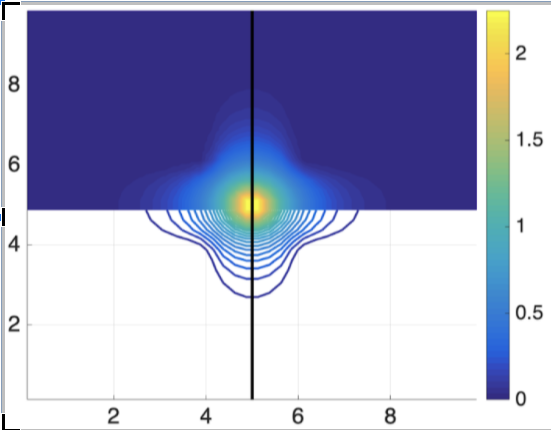 Linear kinetic transport equations play a critical role in optical tomography, radiative transfer and neutron transport. The physical and velocity/angular variables that the solution depends on are  6-dimensional, and the problem is inherently multiscale in nature.  These features hamper the  efficient and accurate numerical simulation of such problems. As part of ICERM’s Spring 2020 program on Model and dimension reduction in uncertain and dynamic systems, Yanlai Chen, Yingda Cheng, Fengyan Li, and Zhichao Peng joined together to work on a reduced order model approach that would allow efficient and robust simulations of  linear kinetic transport equations. [Link to: A reduced basis method for radiative transfer equation,
Authors: Zhichao Peng, Yanlai Chen, Yingda Cheng, Fengyan Li
arXiv:2103.07574  https://arxiv.org/abs/2103.07574]
The key observation exploited by the group is that the diffusive limit of these equations (the limit as the Knudsen number goes to zero) hints at the  existence of a hidden low-rank structure. Leveraging this idea, they designed and tested an angular-space reduced order model for the linear radiative transfer equation. At the core of this approach is an iterative density cascade procedure where the macroscopic density is constructed from reduced basis method (RBM) snapshots, treated explicitly and allowing a transport sweep, and then updated afterwards. A greedy algorithm can then proceed to adaptively select the representative samples in the angular space and form a surrogate solution space. This novel approach is used as an inner-layer solver of a multi-layer framework that enables robust and accurate reduction across parameter and angular spaces.

The figure above shows that, for two different sample problems, the reduced order model (bottom half) captures the solution well compared to the full order model (top half). This is confirmed by rigorous accuracy and efficiency studies that revealed a 6x speedup for two physical and one angular dimensions while committing an error of less than 1%. More dramatic savings are expected when either the dimension is higher or when the kinetic system is parametrized.