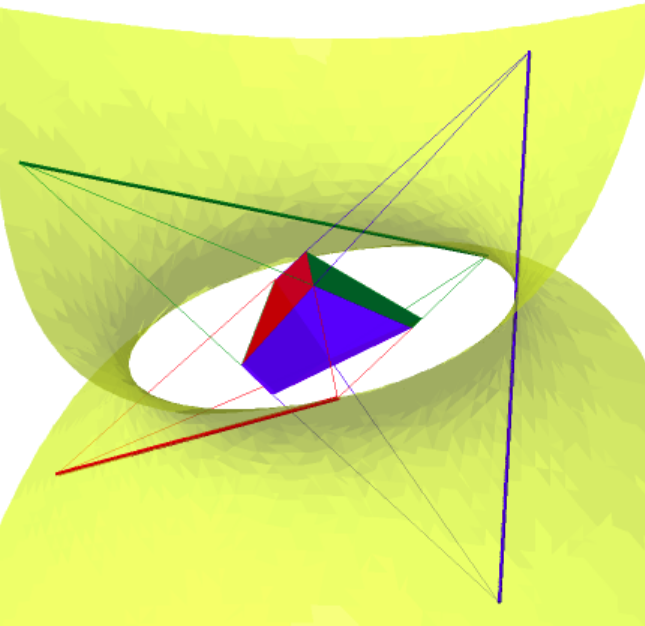 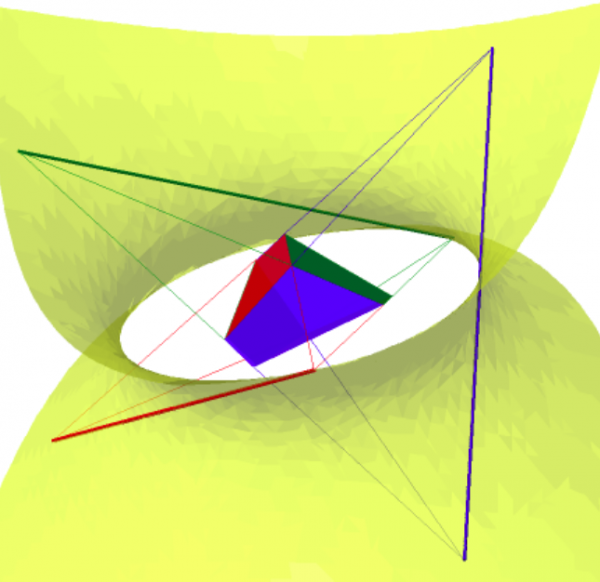 Wachspress and Warren used different ideas and techniques to construct their Wachspress coordinates.  To bridge both approaches, Kathlén Kohn and Kristian Ranestad developed a proof for the following conjecture: For every polytope (whose defining hyperplane arrangement is simple) there is a unique polynomial equation of minimal degree which is zero along the non-faces of the polytope [KK19]. For instance, a perturbed cube has three non-faces: There are three pairs of opposite sides on the cube (red, green and blue in the second figure), and each pair of planes spanned by two opposite sides on the cube intersects in a line (also in red, green and blue, respectively). So the three non-faces of the perturbed cube are three lines. The conjecture proven by Kohn and Ranestad states in this special case the well known fact that there is a unique quadratic polynomial whose zero set contains the three lines. This quadratic zero set is visualized in yellow in the second figure.

In addition to the applications of barycentric coordinates mentioned above, this result is relevant in statistics (when studying probability distributions on polytopes) and it relates to the classification of algebraic varieties with a unique canonical divisor, a rich and classical topic in algebraic geometry.

The Fall 2018 program on Nonlinear Algebra at ICERM had many activities and yielded many more new results in algebraic geometry and its applications, such as computational methods, optimization, graphical models in statistics, matrix completion or computer vision.