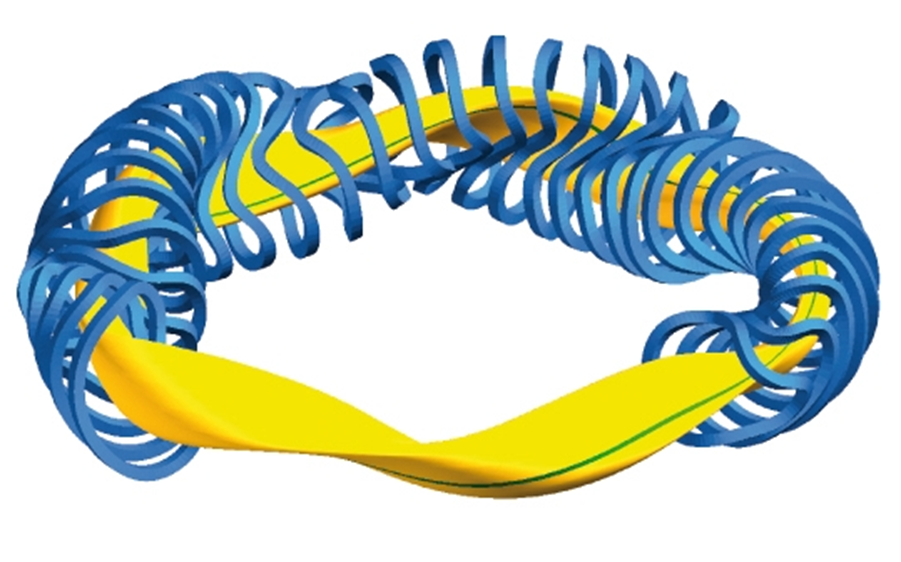 A plasma is like a square dance gone awry.  As the pace and intensity of the music (the temperature) increases, the partners (the atoms) separate into unattached dancers (electrons and ions) interacting throughout a riotous turbulent sea of independent participants (a plasma).  The study of hot plasmas is central to the search for the limitless supply of energy by the nuclear fusion reaction and this requires the “dance” be controlled by confining forces.  The magnetic force on electrons and ions is used to confine the plasma, with hard collisions resulting in the fusion reaction that yields energy.

Crucial to magnetic fusion is the design of magnetic bottles, visualized by magnetic field lines, across which the motion of electrons and ions is inhibited.  Complicated arrangements of electric currents are used to create the magnetic fields in such a way that leaks are minimized.  A variety of magnetic bottles, e.g., tokamaks and stellarators, have been created with leading contenders having the shape of complicated doughnuts (tori) as depicted below. 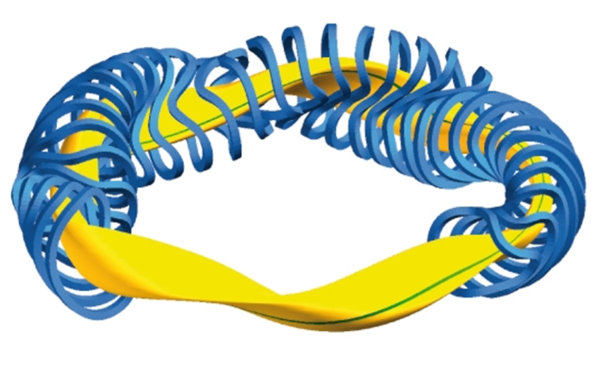 Depiction of the coil system (blue) and plasma (yellow) of Wendelstein 7-X, a plasma device called a stellarator, located in Greifswald, Germany.  A magnetic field line is highlighted in green on the yellow plasma surface. For scale, the major radius of this toroidal device is 5.5 meters with a plasma volume of 30 cubic meters.

Among the prospective designs for magnetic bottles, that is, future nuclear fusion reactors, stellarators may hold the most promise.  Notably, and in contrast to many other proposals, the stellarator concept offers the inherently quiescent and steady-state operation that society has come to expect from its power plants.  On the other hand, the problem of designing high-performance, cost-effective stellarators remains a huge challenge for physicists, mathematicians, and engineers alike.  In particular, very little is understood about the part of design space corresponding to stellarators without the unacceptable leaks — leaks that would prevent useful energy production.

Starting with a collaboration that began at the Fall 2018 MSRI Program Hamiltonian Systems, from Topology to Applications through Analysis and that continues to be supported by the Simons Foundation in New York, J. W. Burby and R. S. MacKay began the process of bringing the sweet spot in stellarator design space to light, much as an archaeologist would go about uncovering a large fossil. Where the archaeologist uses chisels and brushes, Burby and MacKay wielded differential geometry and the theory of partial differential equations. The picture that emerged from this mathematical dig crisply delineates the sweet spot for the first time. The “leak-free” stellarator shapes turn out to arise as solutions of a novel equation that was derived as part of the collaboration. This equation promises to substantially change the stellarator design process for the better, and therefore marks hastening progress toward an ultimate goal of viable fusion energy production.