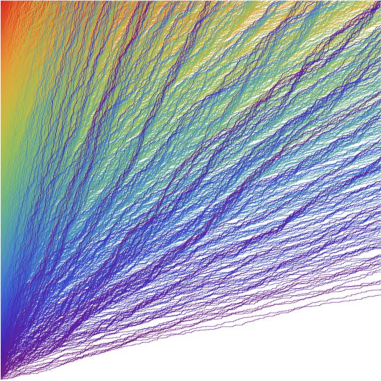 This semester, participants in the Universality and Integrability in Random Matrix Theory and Interacting Particle Systems semester program studied the broad connections between random matrix theory and interacting particle systems, which can be used to model atoms or molecules, but also to find applications in areas as dissimilar as traffic flow, epidemiology, and financial markets. Random matrices have long been useful tools in quantum field theory and statistical mechanics. Mathematicians have also discovered surprising connections between the field and other research areas, such as the zeros of the Riemann zeta function, some of which were explored at previous MSRI programs on random matrix theory in 1999 and 2010. This semester, researchers focused in particular on universality — roughly, what can be known about the distribution of eigenvalues of random matrices with little information about their entries — and integrability — the study of model systems that have additional structures that allow for extraordinarily explicit solutions.

An illustration of a stochastic vertex model, one of the systems studied by participants in the MSRI semester program. Paths emanate from the left boundary and move as random walks except when they intersect, in which case they switch orders with probabilities that depend on their relative positions.  Credit: Leonid Petrov.

In the stochastic interacting particle system known as the asymmetric simple exclusion process (ASEP), particles are distributed on the one-dimensional lattice (think of the integers on the number line) so that each site is either empty or filled. Particles “jump” to the right or left with probability p or 1−p, respectively, but a particle can only complete the jump if its landing site is empty. The time evolution of the particle density in such a system is approximately governed by a stochastic partial differential equation, which shows complex behavior such as the formation of shockwaves. In 2000, mathematicians discovered to their surprise that the statistics of the ASEP current are governed by the Tracy–Widom distribution, which was known to describe the statistics of the largest eigenvalues of certain random matrices. Since then, there has been a rich history of exploring unexpected links between random matrix theory and stochastic particle systems, with ASEP being one of the most-studied models.

Recently, variations of the ASEP have piqued mathematicians’ interest. One of these variations is a multi-species ASEP. In this model, the particles in question are divided into two or more types that interact with each other hierarchically. For example, a heavier particle may be allowed to displace a lighter particle in a jump, whereas the reverse is not permitted. A group of researchers from the semester program is studying the limiting behavior of particles in multi-species ASEPs when particles swap positions following certain rules. Another group of program participants began a project combining stochastic partial different equations and a technique known as duality to study the order and distribution of the various species as the system evolves.

This semester’s program was held in a hybrid format in fall 2021. Scheduled activities included three workshops, dozens of introductory and seminar talks, courses, panels, and problem sessions, but as with all MSRI semester programs, much of the value was in the less-structured interactions among the concentrated collection of researchers in this specific area, which facilitated mentorship and new research collaborations. This aspect of the program was especially valuable for the early-career participants, 16 postdocs and 10 graduate students, who were able to start projects with each other and more established researchers in the field. Postdocs and graduate students were the driving force behind many of the semester’s activities and the research projects that were started. The framework of the semester allowed these projects to progress quickly and planted seeds for new collaborations.